Culture, if I may define using layman’s terms is the way of life of different people. Culture has been a part of our life since centuries ago until now. Numerous cultures were passed down through generations, with some already neglected, and others still being practiced today.

Culture is inevitably diverse. Hence, it makes us a unique individual. Culture that seems foreign to your country is actually a standard for another. This notion sometime links us to treat bizarre cultures as a laughing stock. Nope, regardless of the cultures we have, respect and acceptance should always come in between.

We’ve been discussing about cultures in our class, and truth be told, there are cultures that seem strange for me as well, and at the back of my mind, I thought: “A culture like this actually exists/existed?” But this actually paved me a way to fathom these cultures. And I will not keep them to myself, in this article I am going to share with you several beauty standards in the world you might or might now know about. In the Philippines, many of us spend thousands of pennies for braces to have a perfectly aligned teeth, but in Japan, having a “yaeba” or crooked teeth is considered as the cutest part of women.

It actually drives some Japanese men crazy because they find it cute and youthful. They even go to dental clinic to have their upper canines look like fangs; they call this procedure as “tsuke yaeba”. Well, beauty is really subjective, isn’t it?

All of us had probably walked barefoot when we were a kid. And it’s normal. But what if I tell you that in China, they have this tradition called foot binding or toe curling?

Walking with lotus feet surely hurt, right? This practice continued until early 20th century by aristocratic women and poor families in China. It’s actually considered as a sign of beauty and wealth.

Imagine this: at the age of approximately 4, a girl’s toes would be curled under and then bound with fabric or silk bandages, beginning at the ball of the foot and wrapping around the heel to the top of the foot.

All of her toes would bend under the sole of her foot, leaving only the tiniest piece of her toes exposed to be painted in a vivid color. Infection or even death could arise from this binding process. 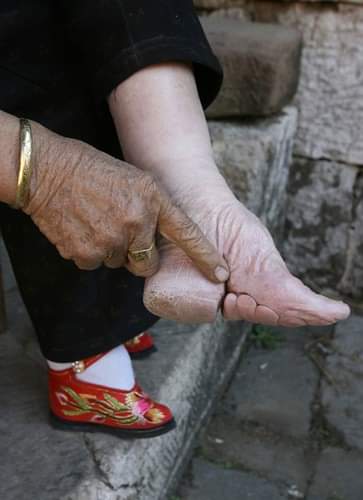 It’s debatable why women wear nasal plugs. While some claim they are for beauty, others believe they are to protect women from rival tribes kidnapping. Dayak people who live in a certain river in Indonesia believe that Dayak women with long earlobes were the most attractive.

The procedure of earlobe piercing starts in childhood. When a baby girl reaches the age of four, her ears are pierced to familiarize her with the piercing and allow her to wear hisang- earlobe-lengthening earrings.

With rising age comes an increase in the number of hisang. Depending on her community’s social position, a married woman’s total hisang could be around 20 pieces in each ear. The hisang itself is constructed of silver or bronze, depending on their social standing.

The longer it is, the more valuable that individual is to the group. The goal of lengthening the ears is likewise assumed to be a symbol of patience rather than a display of noble position. If you utilize it every day, your patience and capacity to endure the heavy hisang’s agony will improve. If Thailand is one of the Asian countries you dream to work at because of its low cost of living, then did you know that about two decades ago, Kayar inhabitants (Kayan) were forced to evacuate Myanmar due to an increasing civil war between Karenni insurgents and the Burmese army?

Long-necked Kayan women have worn the rings since childhood, starting with four or five and gradually increasing their number as their weight increases.

The chest and shoulders are depressed by coils weighing up to 25 pounds. This gives the impression of a disembodied head floating over a gleaming gold ring pedestal.

Even the Kayans are baffled by the origins of the tradition. Rings, according to mythology, protected peasants against tiger attacks because the cats attack at the neck.

Another idea claims that the rings helped women repel competing tribes’ men by reducing their beauty.

However, people nowadays believe that the longer a woman’s neck is, the more attractive she is, and Kayans wear the golden coils as an adornment. Can’t get enough? In the Philippines, some have their lips pierced to look cool, but in Africa, lip plates, also known as lip plugs or lip discs, are a popular type of body alteration.

The treatment, which entails knocking out the bottom two teeth (occasionally all four), is performed between the ages of 15 and 18, and it is considered a sign of womanhood.

When a Mursi girl reaches puberty, her mother or one of her kinswomen will pierce her lip and install a small wooden plate, as done among the Surma and Mursi people of Ethiopia’s lower Omo River valley.

The plate is replaced with a slightly larger one after the wound has healed, which normally takes two to three weeks. Some of these cultures are either continued or evolved, while others are already banned or outlawed.

Do you find them interesting? Don’t hesitate to share your ideas and knowledge about cultures that you know!